A total of 176 ZIMRA employees have been suspended/dismissed since 2016. 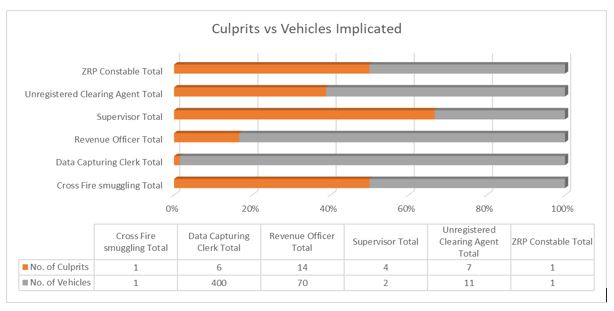 Data capturing clerks have the highest impact on vehicles that are imported into the country without payment of duty. They are now a corruption hot spot.

A 29-YEAR-OLD Zimbabwe Revenue Authority (Zimra) official accused of defrauding his employer of US$433 000 and $1,5 million while stationed at Plumtree Border Post was yesterday denied bail by a Bulawayo magistrate on the grounds that he was a flight risk.

POLICE have launched a manhunt for a Zimbabwe Revenue Authority (Zimra) officer Sekelwe Maphosa who is part of a gang that defrauded the authority of millions of dollars in a fraudulent vehicle clearance scandal at Plumtree Border Post.

Two Zimra officers, Teeklar Ndlovu (55) and Norest Ushe (29), have since been arrested for fraudulently clearing 50 vehicles without charging import duty. Maphosa is still at large and the police are now looking for her.

A ZIMRA data capture clerk, Herry Phiri has resigned after he was charged with 183 counts of fraud. He allegedly forged customs clearance certificates to evade duty. Phiri appeared before Beitbridge Resident Magistrate, Langton Mukwengi and was granted $5 000 bail and ordered to report three times per week at Beitbridge Police. He was remanded to a later day for continuation of trial.